Will two male Yorkies get along, or will there be constant fighting and dominance issues? If you’re considering getting a second Yorkie, this is definitely something you’ll want to consider. This article has everything you need to know.

When raised together, two male Yorkies will get along easily. If you are getting the two males at different times then it’s important the first male is already house trained, well-socialized, and no longer a puppy.

Can Two Male Yorkies Get Along?

As explained above, two male Yorkies can get along just fine. Although there are some potential dominance issues (explained later) most of the time, the relationship will work out.

Getting both at the same time

If you’re getting two male Yorkie puppies both at the same time (perhaps even siblings) then this is the best scenario. The two males when raised together pretty much always work out…

If, however, you are getting two male adult Yorkies (perhaps from a shelter) then there could be some issues. Two male adults that don’t already know each other will eventually compete to claim the alpha spot (fighting and/or dominance behaviors).

Getting one after the other

The other scenario (and the one more likely) is that you already have one male Yorkie and are considering getting another. In this case, the two won’t know each other beforehand making the situation a little more tricky.

In this situation, it’s advised to wait until your first male Yorkie is properly house trained, thoroughly socialized, and no longer a puppy. Having an obedient and friendly adult is much easier to manage when bringing in a new puppy or dog, than a puppy who still isn’t trained and running rampant.

If you ensure your first male Yorkie is friendly and obedient, the relationship will most probably work out well without many issues. There will always be a few hiccups along the way, but all in all, it should be successful.

Trending: When Do Yorkies Go Into Heat? The Complete Heat Guide

The biggest concern for owners is whether two males will constantly fight in order to claim the alpha spot.

The truth is that there will always be a few battles in every relationship. Even two males that predominantly get along will occasionally pretend they’re shooting a scene in the movie Gladiator.

However, If the two Yorkies do not have a very good relationship to start with, then the fighting could elevate up to more than just a quick scrap. Without a good foundational bond, serious fighting could break out frequently.

This is why it’s crucial for us to make sure everything is set up for a good relationship to start with. Making sure both Yorkies have positive experiences around one another (praise & treats) will help nurture positive feelings and associations between them.

Will Two Female Yorkies Get Along?

Again, similar to males, it’s much easier for the two to get along if they are raised with each other (this practically ensures a perfect relationship).

However, if you are getting a second female at a later date, then it’s crucial that the first is house trained, well-socialized, and no longer a puppy. As before, this will help ensure a calmer, more sensible relationship from the start.

Popular: Can Yorkies Be Left Alone? (How Long Is Too Long)

In general, yes, Yorkies do like being in pairs. In fact, Yorkies like to have another canine buddy regardless of the breed.

When considering which breeds partner well with others, it’s important to identify their similarities. In the dog world, opposites don’t usually attract, meaning dogs that are similar to one another are more likely to get along.

With this in mind, two Yorkies are well-suited due to how naturally similar they are.

And in case you were wondering, unfortunately, it has not yet been proven whether dogs can identify their own breed. Scientists and researchers are leaning towards no.

Do Yorkies Need Another Dog?

Yorkies do not necessarily need another dog or canine companion, although it would most likely be appreciated.

Yorkies will be more than fine so long as the owner is there to fill that companionship gap. Yorkies are highly social and do like to have the company of their owner for most of the day.

Dog behavioral experts have confirmed though that dogs are generally happier when they have another dog by their side.

Reader’s favorite: Do Yorkies Smell? 7 Reasons Why & How To Help

Should You Get Two Yorkies?

If you want double the love and cuteness, then the answer is an easy yes. But it should only be a yes if you are ready and able to take on the work of two Yorkies.

Two Yorkies could also mean double the trouble if left untrained, unsocialized and understimulated. Getting a second dog is quite a big decision, and oftentimes backfires on owners that are not prepared for the extra work.

In regards to gender, it’s true that it’s advised to get different sexes. A male and female make for an easier time with the relationship than getting two of the same gender…

However, as explained above, two of the same gender can work out. You’ll have to ensure the first Yorkie is completely house trained, socialized to a high level (a.k.a very friendly), and is no longer a puppy or adolescent. If this is all in place then gender should not matter too much.

Back to more Yorkie Tips & FAQs 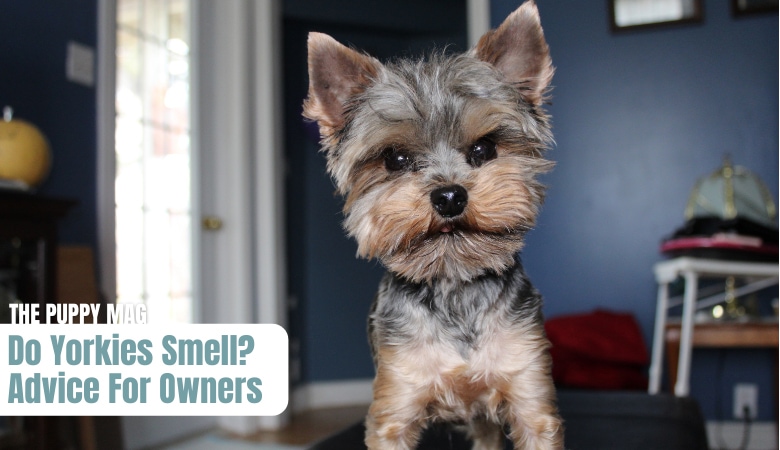