Australian shepherds can definitely learn to swim but they might be hesitant around water at first. With the right introduction to water, plenty of encouragement, and patience, any Aussie will quickly love the water and swim like a champion.

I’ll break this down into a full explanation and give some important tips all Aussie owners will want to know.

Most Australian Shepherds Like Water: But Not At First

The good news is that when speaking to other Aussie owners, most of them confirmed their Aussie’s love for the water. But… they also said it didn’t come straight away.

The reason for this is mostly down to a lack of water exposure for most of their working history. Aussies primarily worked as herding dogs on ranches, on land. They were rarely used in the water.

This gives the breed an instinctual hesitancy towards the water, especially when they’re a puppy.

Having said this, Australian shepherds are active, fun-loving dogs that are strong and physically capable. So from the moment they realize they can swim in the water, it’s hard to keep them out of it!

The key to your Aussie liking water is to introduce them to it correctly.

P.S. For those with Aussies that have already developed a strong fear for water, the advice is similar, but I’ll cover this on it’s own below.

⭐ The slow and easy introduction approach:

● Water introduction should at first be indirect (not trying to get him wet or use the hose on him). For example, having a small paddling pool or laundry bowl filled with water, for him to inspect on his own terms without pressure.

● Whenever your Aussie goes near the water or seems intrigued by it, offer him plenty of praise, treats, and encouragement. This should be very passive and effortless.

● Building a positive association with water is the key. If he relates water with being a “good boy” and plenty of positive attention then becoming fond of water will happen quickly.

● If he’s pressured too much before he’s ready it will be experienced as a negative interaction, making it even harder for him to relax and remain confident.

● Once your Aussie is completely unphased by the water, the next level would be to step inside the paddling pool and try interacting with him. Offer your praise, toys, treats and help him in if he seems interested. The water should only be very shallow. Swimming comes later down the line.

For Aussies That Are Already Fearful of Water

For those that are already aquaphobic, the process is similar but it will take a lot longer.

It still remains necessary to re-establish a better relationship between them and water using treats, praise, toys in a nonforceful way.

A lot of negative experiences come from having the hose pointed at them or being bathed when they’re already very scared.

Typically, the best way around this is to again use a shallow paddling pool or laundry basin on the ground, filled with water. Try your best to play with him around the pool (but never focus on it), until he can at least be around the body of water without it worrying him. As time goes on, you can sit down next to the pool and encourage him to take a proper inspection at his own pace.

⭐ In my own experience:

This was the method I used to teach my friend’s husky to like water. It took a long time for him to build up the confidence to come to me while I was next to the water, but once he did, he received a tonne of praise and it slowly got easier from then on out. After weeks of increasing exposure to water (indirect and direct), he eventually came around to getting in the pool… until shortly after, all he wanted to do was be in the pool!

While doing this I had to refrain from using the hose for a while. The hose can be very intimidating for a dog, as it fast-flowing water that can be directed. Having a still body of shallow water feels a lot less threatening, and is therefore the best way to build up some initial trust and confidence.

Here’s What 17 Australian Shepherd Owners Had to Say

Don’t just take it from us! We put the question to 17 Australian shepherd owners and 15 out of the 17 said that their Aussie liked the water. Source

⭐ Magicbrou (Yes)
All ours have been hesitant but like with so much else, it’s just a question of encouragement. We always teach them to swim since we love swimming and it’s a great way to get exercise without getting too hot in the summer. We also teach them to tag along on surf/SUP boards since it’s a fun activity to do together. After a while, they start to genuinely like it.

⭐ Catrm15 (Yes)
My Aussie has always been OBSESSED with swimming. He was not hesitant at first. However, he hates being sprayed with the hose and will not walk on grass if it’s wet lol.

⭐ Sheridcch (Yes)
My boy loved the water. We lived in Hawaii and his first time in the water was at a beautiful local beach and his comfort with the water was instantaneous, almost as if it was pure instinct. He even loved the waves and getting barreled by them. I was concerned he would be hurt but he absolutely loved it.

⭐ NikolaiUK (Not really)
My girl hated it at first and now will go in, but, only up to her belly. Definitely won’t swim.

⭐ Claraib97 (No)
Ours hates it, he doesn’t even really like being out in the rain.

⭐ Wildeyedflowers (Yes)
My pup LOVES water. He didn’t like the waves at first but now anywhere we go with any kind of water he’s trying to go for a swim. He’ll even just go stand out in the rain lol.

⭐ Lumpy_Box9710 (Yes)
Ours loves water that’s a little more still. Waves scare her a little though. I think with a life vest she’d have no trouble.

⭐ MiniSriracha (Yes, but not at first)
Our Aussie was afraid to step deeper into water that went past his elbows. We took him to a swimming class at our local animal rehabilitation center, and now he loves to swim!

⭐ Existentialuau (Yes)
My girl has always loved the water. We introduced her to a forest creek at 4 months, which she didn’t hesitate to run, play, and lie in. At 6 months we took her to the beach and she sprinted to the shore and leaped right in to the surf. Since 8 weeks, we have encouraged her to be adventurous and courageous. Positive, positive reinforcement goes a long way.

⭐ Stacyzarc (Yes)
So far my 15-week old likes to go up to her torso. She once jumped a bit deeper in the river, and then just booked it for shallower water.

⭐ Clancy-ok (Yes)
Our Aussie loves water! She loves to play in the creek or swim in the stock pond when she is with my husband while he is working. He gives her baths in the shower, and she used to jump into the sink when she needed to be cleaned up.

⭐ Whycats (Yes)
My Aussie loves the water, loves swimming, and will jump in every puddle she sees. She comes kayaking with me and does great in the boat. When she was a puppy she was a little hesitant about jumping in the water from a dock or something similar, but now does it without hesitation.

⭐ Apstrak (Yes)
My Aussie did not like the water at first. But during the summer when it hit 95 degrees he started to go in the pool and lay down on the steps to cool off. He now will swim in creeks and lakes. Although he is not a strong swimmer. He loves waves too.

⭐ Christina_skis (Yes)
Daisy is obsessed and always was obsessed. We threw a ball in and that was that. Now she legit just… goes swimming even if no ones in the pool.

The Puppy Mag put together this survey to get real responses, as there’s nothing better than hearing first-hand what other owners have experienced with their Aussie.

It seems that without a doubt, the overwhelming majority say that their Australian shepherd loves the water despite a common hesitancy, to begin with.

Teaching Your Australian Shepherd How To Swim

Teaching your Aussie to swim isn’t a difficult task at all, especially if your Aussie is already confident in shallow water.

The best way to do this is in a controlled environment. A pool in your own yard would be most ideal for swimming practice. Alternatively, there are doggy swimming centers in most major cities. While it’s still possible, it’s advised to avoid the ocean unless your coastline is very calm with little current.

⭐ Tips to get your Aussie swimming:

● Always use a lifejacket to begin with
● Start with shallow water before putting him out of his depth
● Increase the water to around his neck/head height. You’ll be able to use the central handle on his life jacket to lift him up from the bottom (he’ll be much lighter to lift in the water). When his legs come just off the floor they should start paddling instinctively. If his back legs aren’t paddling, lightly touch them with your other hand and this should trigger them to start.
● Once he has had a few quick sessions of practice paddling. Increase the water level so it’s out of his depth.
● Get in the pool again and help him in. Briefly take his weight using the central handle to give him a nice calm start, slowly let him go, and watch him paddle!
● Offer him plenty of praise and treats when finished

And that’s pretty much it! The truth is that most of this is very instinctual, your job is just to make the process safe and gradual.

At first, he’ll probably splash around frantically but with a little practice, his paddling will produce less splashing and become much more effective and smooth. It’s important that all four of his legs are paddling so keep an eye on this.

● Once he’s proficient at swimming, it’s crucial to practice WITHOUT the lifejacket. There could be a situation when he goes in the water without one and if he’s never felt the difference, this could stump him. Practice with and without the lifejacket.

● Practice sessions should be kept very short (15-20 second bursts of swimming). Swimming is a super tiring physical activity and you always want to take him out of the pool before he becomes burnt out or exhausted. Keep it short and sweet to remain safe.

Based on safety, quality, and performance here’s our recommended swimming gear:

Thank you for reading!
I hope this was informative and helpful. If there’s anything I have missed, please reach out to me!

Back to more Australian Shepherd articles >>> 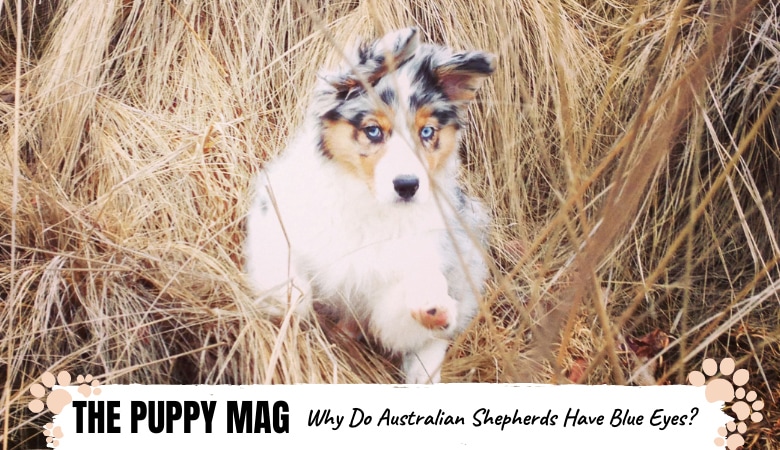 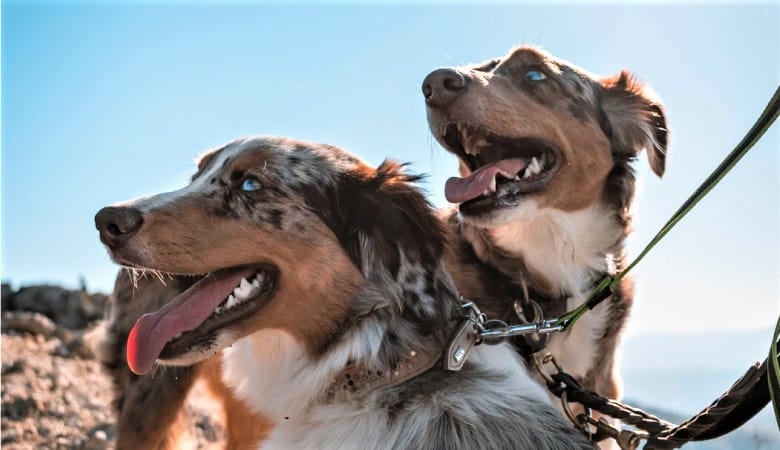