Cocker spaniels have their tails docked to conform to breed standards and compete in shows. In the past, however, tail docking was thought to reduce the chance of injury and improve working abilities.

Why Do Cocker Spaniels Have Docked Tails

The main reason why cocker spaniels have their tails docked is to meet breed standards set out by kennel clubs such as the American Kennel Club. Adhering to these breed standards allows owners to put their dogs into shows.

In the past, most working spaniels have had their tails docked as owners said it reduced injury in the fields and improved overall working ability. Dogs working in fields would be vulnerable to something called foxtails (speargrass) which can lodge in tails as they wade through the grass. If the spaniels became injured, they were no longer “useful” for the owners.

Tail docking has quite a bit of history too. The procedure actually started around Roman times and was thought to improve hygiene. Romans believed that dogs with long tails were more likely to catch rabies, thus, tail docking began.

The truth, however, is that these are all subjective benefits, with many veterinarians and trainers objecting to them. The main reason remains to be conforming to breed standards.

From the AKC breed standard:

“Back is strong and sloping evenly and slightly downward from the shoulders to the set-on of the docked tail. The docked tail is set on and carried on a line with the topline of the back, or slightly higher; never straight up like a Terrier and never so low as to indicate timidity.” AKC Source

When Do Cocker Spaniels Have Their Tails Docked?

Cocker spaniels usually have their tails docked 2-5 days after birth. At this age, no anesthetic is administered.

Tail docking should not be carried out any later than 5 days after birth. After 5 days, the tissue in the tail, nerves, and blood vessels are already too far developed. Unless for medical reasons, 2-5 days is the only window for tail docking.

Popular: How To Deal With Cocker Spaniel Shedding

This is where this topic gets controversial, so let’s clear everything up. The fact that no anesthetic is administered opens up the possibility that the puppy feels the entire procedure to the full extent. People supportive of tail docking claim that a puppy’s nervous system is not developed enough at 2-5 days for them to feel it (or at least most of it).

The big issue with this, however, is that many highly qualified veterinarians and animal scientists have come out and said they do in fact have a nervous system that’s developed enough to feel the entire procedure, which of course would be excruciatingly painful and likely result in huge trauma at an early age.

In addition to this, most people including veterinarians, behaviorists, trainers, and all-around experts have agreed that tail docking brings no benefit to the dog. If dogs were actually better off without tails, then they would have never developed them in the first place. “Nature makes no mistakes”

Short answer: No. For the reasons given above, and the overwhelming evidence that supports puppies can feel the procedure, tail docking is already banned in many countries.

Tail docking is banned in the UK, Canada, and Australia, to name a few. At the moment, tail docking is still allowed in the USA. But this is likely to change over the next few years. More info

What Length Do Spaniels Have Their Tails Docked To?

3-5 inches is the standard length that all tail docking is done to.

Is it possible that a cocker spaniel is born with a naturally short or docked tail?

Cocker spaniels are always born with tails that grow to full length. Even if two parent spaniels have docked tails, their offspring will all have normal long tails when born.

What about bobtail cocker spaniels?

There is an incredibly slight chance that a cocker spaniel will be born with a bobtail, which is a naturally short tail. This is the result of a recessive gene mutation known as the C189G gene. Bobtails look very similar to docked tails and can be passed down through any blood lineage and exist in all breeds. More info.

Bobtail cocker spaniels should never be bred with other bobtails, as this can result in devastating health abnormalities. This makes it crucial to ensure your spaniel has a docked tail from surgery if you consider breeding them. In most cases, breeders will make owners aware if the tail is a bobtail, but this can be difficult to know if the spaniel has been rescued at a later stage.

Do All Cocker Spaniels Get Their Tails Docked?

And it’s worth stating in black and white that spaniels do not need their tails docked. I know it sounds peculiar saying that now after all of the above, but we get many questions specifically asking if tail docking is a requirement. No, it isn’t!

Can You Ask Breeders Not To Dock Tails?

If you plan on getting a cocker spaniel in the future and you know who your breeder will be, it’s important to tell them in advance that you do not want the tail to be docked.

Due to tail docking happening 2-5 days after birth, the decision mostly comes down to the breeder unless owners have informed them otherwise. In the USA most breeders will dock the tail as it makes the puppies more saleable (due to conforming to AKC breed standards).

Popular: Does My Cocker Spaniel Love Me? 11 Real Signs of Affection

Another Good Reason Not To Dock Tails

Aside from the pain and trauma it may produce, we haven’t discussed another major drawback to having a docked tail, and that’s communication.

Tails are an invaluable tool for dogs to communicate with each other as they approach them. A lot of information can be signaled to other dogs depending on what the tail is doing. Dog’s can indicate whether they’re friendly, or not to be messed with.

Having a docked tail almost entirely removes this ability to signal to another dog “hey, I’m friendly!”. A wagging 2-inch stump will not easily be seen by an approaching dog.

Because of this, dogs with docked tails have been known to find it harder to get along with other dogs.

This is such a shame considering the amazing benefits of socialization for dogs. Not only does it provide valuable mental stimulation, but the more socialization they engage in, the friendlier and happier they become.

Of course, this doesn’t mean ALL dogs with docked tails can never get along with other dogs… But it does make it significantly harder.

Cocker spaniels nowadays have their tails docked to conform to breed standards.

A lot of evidence and scientific research is now indicating that puppies do in fact feel the full force of this procedure, and because of this, tail docking is already banned in many countries around the world.

Although this subject can sometimes be controversial, I think it’s important we always prioritize the health (both physically and mentally) of our puppies. And if there’s even a slight chance this procedure causes them pain, it should be stopped.

Thank you for reading! Back to more Spaniel articles 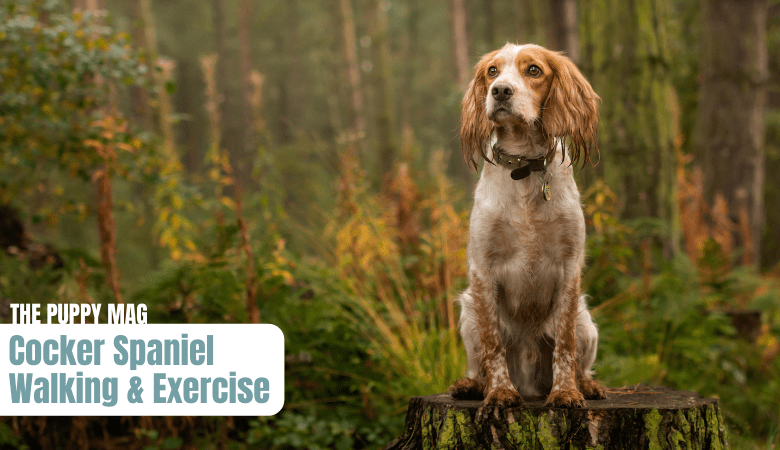