Have you ever wondered how Australian Shepherds get those beautiful blue eyes? This article explains exactly how Aussies can have different colored eyes and provides the answers to all your questions.

Australian Shepherds have blue eyes due to a gene mutation known as the merle gene. The merle gene causes a lack of pigment in the iris, resulting in a light blue eye color!

Why Do Australian Shepherds Have Blue Eyes?

Australian shepherds have blue eyes due to having a lack of melanin in the iris. This is a condition called Heterochromia.

The color of your Australian Shepherd’s eyes depends on the presence of melanocytes found in the iris.

The melanocytes are responsible for producing melanin. Dog’s typically have an adequate amount of melanin which means they are likely to have “normal” brown eyes.

Heterochromia/Merle gene disrupts the production and distribution of melanin, which will result in blue, amber, green, or particolored eyes.

Melanin is also a pigment that is also found in hair, skin, and nails.

How Do Australian Shepherds Get Heterochromia?

Heterochromia, for the most part, is caused by a genetic mutation that can be carried down from a parent. In some rare cases, heterochromia can be caused by an injury, illness, or in worse cases brain trauma. This would be called acquired heterochromia.

The Merle gene is a genetic pattern that doesn’t just affect the eyes, it affects the skin pigment and coat markings too! That’s why Australian Shepherds have a beautiful range of colors and markings in their coats.

The Merle gene is the cause for both coat markings and eye-color variations seen in this breed and many others.

The Merle gene isn’t found in every single Australian Shepherd, but it doesn’t affect a large proportion of the total breed population. It also affects many other breeds including Siberian Huskies, Alaskan Malamutes, Border Collies, American Bully Dog’s, and many more.

You may have had your suspicions that your Australian Shepherd’s coat color and markings were somehow related to his different colored eyes! You were right.

Is Heterochromia Bad For Dogs?

Another very common question about heterochromia is whether or not it’s bad for dogs or causes further health issues.

According to science, the answer is no. Apparently, there is still no scientific evidence that links heterochromia to an increased risk of further eye issues.

In terms of vision and ability to see Heterochromia doesn’t have negative impacts.

It’s important not to confuse the classic blue hazy film that forms across the eye when cataracts are present.

This is a completely different situation and will require medical attention. If you suddenly notice an unusual blue hazy film develop over your dog’s eyes this could be a sign of cataracts and you should schedule an appointment with your veterinarian.

Two copies of the Merle gene will practically always end in severe eye issues, including cataracts, blindness, and even deafness.

A little-known fact is that all Australian Shepherd puppies and many other breeds start life with blue eyes. The shade of blue can vary dramatically and may even include specks of brown, green, or gray.

So at what age will your Aussie pup’s eyes change color?

Eye color in Australian shepherds starts to change between 5-8 weeks. However, if your Aussie has inherited the Merle gene then there is a strong chance that one or both eyes will remain blue.

By 3 months old eye color changes should have settled and the puppy will display his future eye color. However, in some rare cases, puppy owners have witnessed a shift in eye color for up to 6 months.

Once your Aussie is considered an adult (1 year) it’s extremely unlikely that he will undergo a significant shift in eye color. Unless an eye issue is developing such as cataracts and the appearance of a blue haze becomes present.

For most people having one blue and one brown eye is certainly “rare” and uncommon, but it doesn’t stop there…

Green is still considered to be the rarest eye color in Australian Shepherds. Green eyes only happen when the melanin levels are just enough to take the color past blue but not enough to reach amber or brown.

The chances of having “just the right” amount of melanin are very low, meaning green eyes are the rarest.

However, in my opinion, and many others, seeing a dog with particolored eyes is the most stunning of all. Parti-colored means a single eye has different colors.

One half of the eye may be blue and the other blends into green, amber, or brown. The way the two colors blend together also varies and as you can imagine, it’s mesmerizing.

Here’s an example below of the blue blending into brown in one section.

Unfortunately, Australian Shepherds are prone to eye problems so regular check-ups are advised.

Most eye-related issues can be dealt with and there are a number of treatments available. Typically, the earlier the issue is addressed the more successful the treatment will be.

I’ll run through some of the most common issues and what they involve.

Cataracts affect about 4-6% of the breed population and are the most common eye-related issue. Cataracts are typically inherited and usually start developing during old age. Although this isn’t always the case as juvenile cataracts can affect Aussies at around 6 months old.

Cataracts are often spotted when a blue hazy film appears across the eye. The blue film is caused by a build-up of protein. The earlier cataracts are detected the more successful the treatment will be.

This is a painful eye condition that occurs when extra hairs grow on the inside of the eyelid and rub on the eye’s surface. This is actually a very common eye problem across many breeds and Australian Shepherds are even more prone to developing it.

The issue with this problem is that it can go undetected which could lead to ulcers and chronic eye pain. Routine eye check-ups are the key to preventing this issue.

This eye condition is not painful but unfortunately, it’s not curable. PRA is an inherited disease whereby the eyes are “genetically programmed” to go blind.

Australian Shepherds are more susceptible to this eye condition compared to other breeds and there are tests that you can have done to detect the condition.

Pannus is a condition that affects the cornea or the clear part of the eye. Pannus is hereditary and starts affecting dogs as they reach middle and old age.

At first, this condition is not painful and will start with a pink/gray film developing over the cornea. This may progress into a dark-colored physical mass covering the cornea leading to an inability to see. Pannus affects both eyes, but one may be worse than the other.

The Importance Of Routine Vet Check-Ups

After the last section, it’s a good time to mention the importance of routine check-ups for your furry friend.

Seeing your veterinarian 1-2 times per year is all you need to do to keep up to date with your Aussie’s health. Veterinarians are aware of breed-specific health issues and will certainly be checking the eyes whenever you go.

As I mentioned earlier, for most issues, the earlier they are detected, the higher the chance that treatment will be successful.

It goes without saying, vision is absolutely vital for a good quality of life, and we as responsible dog owners should always do our best to facilitate that.

So there you have it! You now know that Australian Shepherds have blue eyes due to heterochromia and the Merle gene disrupting the production and distribution of melanin in the iris.

Be sure to check out The Puppy Mag’s other Australian Shepherd articles on dog care, behavior, training, health, and well-being. 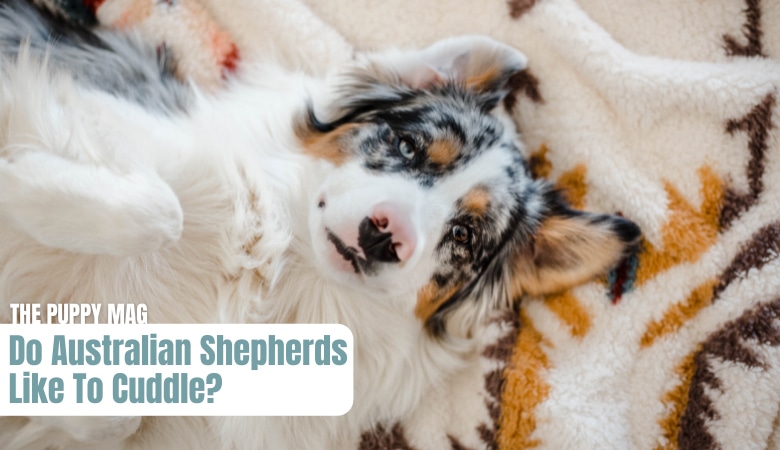