The Siberian husky has a remarkable ability to keep warm in sub-zero temperatures. Many husky owners often ask how do huskies avoid getting frostbite. As someone who has spent many years around Siberian Huskies, this intrigued me, so with the help of science, I found out.

Why don’t huskies get frostbite?

Well, the truth is that any dog can get frostbite under certain circumstances, even huskies. But special physical traits such as a thick-double coat and biologically adapted pads all play a part in making this breed tolerable of very cold weather.

I’ll explain this in full detail below.

Why Huskies Don’t Get Frostbite As Easy As Other Breeds

So, as I just gave away, huskies are not immune to frostbite or hypothermia. But having said that, huskies are extremely tolerant of cold weather, much more than any other breed. Which is still very impressive.

Huskies were bred in eastern Siberia where temperatures often reached -50°C degrees. But it’s important to keep in mind that during these temperatures, the huskies would have likely been inside protective huts with their tribe keeping warm.

Any time the huskies were outside, they would have been working hard pulling sleds and assisting their tribe. Physical activity plays a vital part in keeping their blood circulation healthy and their body warm.

How a Huskies Coat Prevents Them From Getting Cold

The double-coat on a husky is fundamental to their ability to keep warm. The topcoat and the undercoat each have their own roles to play. If you think you know the basics of what a double-coat is, you may want to keep reading, there’s a couple of things that may surprise you…

This is the outer layer of fur you can actually see on a husky. This layer is designed to protect the husky from the harsh outside elements like rain, ice, snow, and UV rays. Sometimes referred to as guard hairs, they are thick, strong, and have a coarse texture to them.

Due to the makeup of the hair fibers, the guard hairs are somewhat water-resistant and do a great job of keeping the undercoat and skin dry in wet conditions.

But not all double-coats are the same; The topcoat on a Siberian husky has far greater water repellent properties to it than the topcoat on other breeds. This can only be put down to natural adaptation to their environment. Huskies have worked in arctic conditions for thousands of years.

The undercoat is considered the soft, fluffy layer that’s on the surface of the skin. This is the layer that sheds, usually twice per year, but this varies depending on the climate where you live. The undercoat is considered to be the insulator and upon inspection is much denser than other breeds. It does an incredible job of preserving heat as well as protecting from the wind and outside temperatures.

⭐ Huskies are able to have a thicker undercoat layer due to their topcoat standing at a more upright angle. Each hair follicle on a husky is positioned at a 45° degree angle, compared to non-northern breeds at around 30° degrees. Simply put, a more upright position allows for a thicker, more dense undercoat. Which of course goes a long way in keeping them warm.

This is original content produced and published by The Puppy Mag | www.thepuppymag.com

The pads on a husky are more intricate than what meets the eye. It’s like they have built-in snow boots that protect their feet from freezing when touching the outside ground. Let me explain how this works.

What is that? The veins and arteries in your husky’s paw pad have an important layout, in that they are extremely close together. This enables the heart to pump warm blood down to the paws through the arteries, which also heat up the neighboring cooler veins. This efficient heat transfer ability prevents paw pads from freezing.

What’s amazing is that this physical trait is not found in any other domesticated pet, only dogs. And as Siberian huskies are one of the oldest dog breeds it’s likely they developed this ability first. (although this hasn’t been proved)

Paw pads have a high amount of fatty connective tissue in them, not only does this make them strong and tough, but it gives them a level of water resistance. This ability will prevent the paws from absorbing ice-cold moisture from snow and ice.

Researchers discovered that this type of biological make-up rivaled that of a penguin’s wing. So there you have it, your husky has penguin wings for feet! Bad joke. Let’s move on.

Huskies Have Bushy Tails For a Reason

Have you ever stopped to wonder, why do huskies actually have bushy tails?

The final touch comes from the soft bushy tail. Huskies are able to effectively bury their head within their tail after it’s curled around. This again reduces the vulnerable surface areas exposed to the outside. The bushy tail can be considered a flexible insulator that curls around to cover the head.

One of the most vulnerable areas for losing heat on a dog is their ears. Again, has to do with the amount of surface area exposed to the outside elements. The ear canals are often just skin. But with huskies, it’s a little different.

Huskies have incredibly furry ears, and this goes for the insides too. Of course, the insides are not as furry as the outside, but it’s still more than what’s seen in other breeds. The furry insides help to reduce the heat loss, enabling huskies to stay warm in arctic conditions, for longer.

So Can Huskies Get Cold?

Yes, despite having amazing weather-resistant physical traits, huskies can still get cold. They are not invincible.

Each husky will be different, and that’s the first important point to make clear. Not all huskies will be able to tolerate the same level of coldness and this can be due to their specific bloodline. If your husky isn’t conditioned to spending a lot of time outside in the cold, then he’ll be less ready to do so in the future.

Want some actual numbers? scientifically speaking, when the temperature drops below around -98°F / -72°C the cells in a dog’s body will not function properly and it’s at this point where serious issues like frostbite and hypothermia set in.

This, of course, is not taking into account actual weather conditions, which can dramatically impact the situation. Rainy and windy conditions will significantly reduce your husky’s ability to remain warm and safe.

Signs Your Husky is Getting Too Cold

The safety of your husky is your responsibility and that’s why it’s important to know the telltale signs of when a dog is too cold.

Huskies like other breeds can get frostbite and hypothermia, so know the following signs will help you avoid a terrible situation.

Signs your husky is getting too cold:

If you notice that your husky is displaying any of the above behaviors, it’s a good indication that he’s getting too cold and needs to come back inside.

So why don’t huskies get frostbite? The answer is that they actually can, and despite being very tolerant of cold weather, are still vulnerable to hypothermia. Always keep an eye on your husky and don’t automatically assume they’re fine, just because they’re husky.

If you have anything to add to this article please contact us! 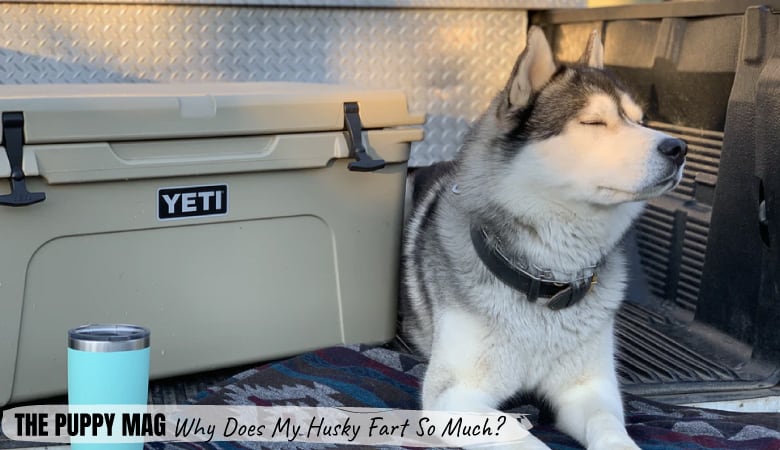