If your Dachshund is constantly whining it can be both worrying and annoying.

Whether he’s whining throughout the day or at night, you’ll want to know why and what you can do.

This article explains everything you need to know on this topic. Let’s get started.

9 Reasons Your Dachshund Is Whining

Whining is one of the most basic forms of communication. And so when your Dachshund whines, he’s trying to let you know something.

Not all whining suggests something negative, but it usually means something is bothering your Dachshund.

There can be several reasons behind the whining, and what will help you the most in finding out the cause, is noticing patterns in whining behavior and WHEN the whining happens.

Typical reasons why your Dachshund is whining:

1) He needs to be let out to relieve himself (potty-break)
2) He’s overly excited and can’t contain himself
3) He’s seeking your attention
4) He’s overly anxious or nervous about something
5) He feels lonely or isolated
6) He’s anticipating/waiting for a daily event to happen
7) He’s in physical pain, chronic pain, or feeling sick
8) He’s whining at night due to loneliness/anxiety
9) He’s suffering from health issues such as dementia

Your dachshund’s whining will almost certainly be covered by at least one of the above.

When Does Your Dachshund Whine? Diagnosing Tips

To properly solve the issue, noticing WHEN your dachshund whines is the best place to start.

⭐ When whining is likely not an issue:

Some of the more obvious scenarios would include whining in the morning before you’ve fed him, or whining in order for you to let him outside… Perhaps he whines profusely for 5 minutes after you arrive home from work while he’s super excited to see you.

In most cases when the whining is both temporary and easily explained, it’s likely not an issue, and the solution is self-explanatory.

⭐ When whining is an indicator of an issue:

When the whining is throughout the daytime or nighttime after his basic needs are already taken care of, it becomes harder to really know what’s causing it. And it’s in these situations that the whining is likely caused by an underlying issue, either to do with his routine, emotional state, or health. And so he’s letting you know, “hey there’s something wrong.”

Additionally, if your dachshund is constantly whining about gaining your attention and being physically close to you, this might suggest underlying mental insecurity, separation anxiety, or pent-up energy that he doesn’t really know how to deal with without you.

Psst. A quick update on Dachshund training! Brain Training For Dogs could be the best training approach we’ve seen for puppies. Results show improvement in obedience and behavior quicker than we thought possible! Check it out.

Underlying Causes Of Whining & What To Do

Let’s run through the typical causes of why your Dachshund might be whining.

Perhaps the no.1 reason why dogs whine excessively throughout the day, is because they are not sufficiently stimulated either physically or mentally. Most owners have the physical element under control, but very few owners fully learn about the importance and how to implement mental stimulation. And this is where many issues begin.

Regardless of their small size, dachshunds at heart, are strong working dogs and need to have their minds put to work. It doesn’t matter how much physical exercise you give, if the mind isn’t worked they will feel frustrated, bored, and on edge until they have some kind of mental release.

This can easily result in random excessive whining throughout the day. Your dachshund just isn’t stimulated enough and his whining is his way of letting you know he needs entertainment or something to do.

I encourage owners to think about how much mental stimulation your dachshund is really getting. Things like daily command training, using interactive puzzle toys, socializing with other dogs, and even increasing your own interaction time with your dachshund.

Although there isn’t a set amount of mental stimulation that I can recommend (usually the more the better), your dachshund certainly needs at least some kind of mental stimulation every single day. As I said earlier, this is one of the most common causes of random whining, so I recommend making some adjustments and seeing how the situation improves.

Believe it or not, accidentally encouraging behavior you don’t want is easily done. As dogs learn quickly and efficiently through positive reinforcement, it’s crucial to be aware of when and what you reward your dachshund for.

It’s natural for us to respond to our dogs when they whine, we ask them what’s the matter, we show them attention, and perhaps even give them a treat!

The thing is, although this likely works to stop the whining, it’s only reinforcing to your dachshund that whining was a good thing, and he’ll quickly make that association. This only leads to more whining in the future, because he knows it gets him attention.

So in the moments when your dachshund is laying quietly (not whining), use that as a teaching opportunity, go over to him, give him a lot of praise your attention and a treat. When he whines, don’t give him that kind of reaction and acknowledgment.

Slowly but surely he’ll learn that whining isn’t what gets him the good stuff (attention and treats).

Of course, when your dachshund whines, don’t automatically zone out. He could be whining for a legitimate reason, so it’s always important to at least become conscious of it, and think about whether he really does need something.

3. Being left alone too often

Dachshunds are a breed that really doesn’t like to be left alone. And with time, being alone can cause a great deal of stress and anxiety, even if it doesn’t really show that much.

Anxiety and stress alone is more than enough to cause your Dachshund to whine aimlessly for what seems to be no apparent reason.

But additionally, this problem could develop into full-blown separation anxiety which could cause him to whine even if you leave the room without him.

Separation anxiety is a significant issue and it can be really hard to overcome. So all should be done to avoid it in the first place. Your dachshund’s whining could be one of your last warning signs before turning into a much bigger issue.

If your dachshund’s whining seems to be related and dependent on your presence, or the presence of your partner, it could indicate that separation anxiety is the issue, or that it’s on the way…

If a typical day for your dachshund involves spending many hours alone (+3 hours), this is something that needs to be focused on. Unfortunately, for most owners, this might be the case due to work. And so it becomes difficult knowing what to do. I have an entire article that covers in detail solutions to this issue. I recommend checking that out here: Can dachshund be left alone & what to do.

How To Stop Your Dachshund Puppy Whining Overnight

For many puppy owners, nighttime whining is a very eye-opening experience! Sorry 😂 I just had to…

Nighttime whining is very common and it usually comes down to the fact that the puppy is still getting used to his new environment and becomes anxious when he senses his mother isn’t there. Most of the time, this goes after a few weeks, but it doesn’t mean you can’t help in the meantime.

Let’s run through some of the three best ways to prevent nighttime whining.

In the beginning, you won’t be able to completely avoid whining, because some of it will be caused by needing to be let out. And that’s a good thing, you want your puppy to let you know he needs to go out, rather than just doing it in his crate.

But with time, a proper bedtime routine will go a long way in helping him go the entire night without whining.

This involves making sure his last meal, treat, and drink is no later than 6pm, at least two different potty-breaks should follow this before he goes to sleep. And the final touch is to have 20 minutes where you’re calmly stroking him or giving him a soft belly rub.

You’re giving him attention, calming him down, and giving him plenty of time and opportunities to clear his bladder. All of which combined should lead to an undisturbed night.

Move the crate to your bedroom

Another excellent way to reduce the whines is to have your puppy sleep in his crate right next to you in your bedroom. After separating from his mother you become the most important source of reassurance, safety, and comfort.

He’ll be able to hear you and smell you close to him throughout the night which definitely keeps him a lot calmer than if he’s downstairs on his own.

One of my favorite comforters is the snuggle puppy. This works wonders and has kept all puppies that I’ve had to look after overnight calm and relaxed. It’s a soft teddy bear that comes with a heat pack and a pulsing heartbeat to mimic the sensation of lying next to his mother. He’ll feel external warmth as well as a slow pulse.

Of course, this is technically a soft toy so it’s best to reserve it for very young pups that cannot yet actually rip anything.

Additionally, a comforter could also come in the form of an old rag or towel that your breeder doesn’t mind giving to you. This will have the scent of his mother on it, and will help him feel more secure while he rests at night.

Remember that the sense of smell is extremely powerful in dogs, simply smelling his mother even though she’s not physically there, still has a big impact.

When To Visit a Veterinarian

As I mentioned above, in some situations your Dachshund’s whining could be caused by underlying health issues or chronic pain.

Conditions like canine dementia (sometimes referred to as cognitive dysfunction syndrome) acts much like it does in humans. It usually happens in senior canines and slowly deteriorates their spatial perception. Not to mention the affects of this on them mentally.

Unfortunately, many health issues go unnoticed for quite sometime before they become a problem (not just canine dementia), so due to this, if you aren’t sure why your Dachshund is whining, it’s worth a veterinary check-up to rule out any issues you might not be aware of.

Thank you for reading. 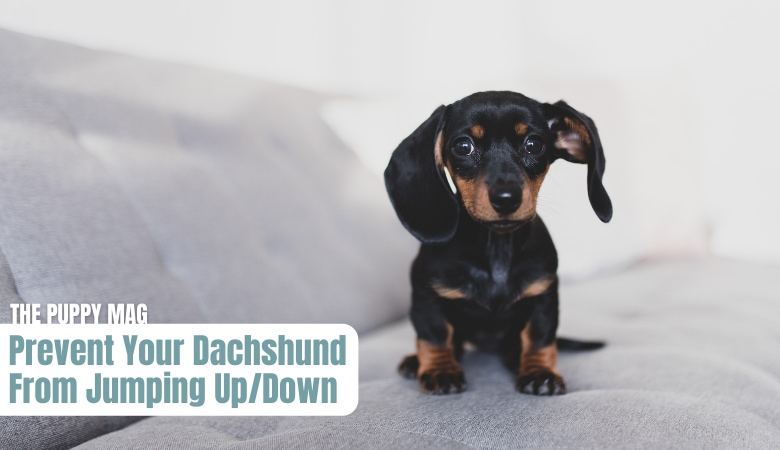 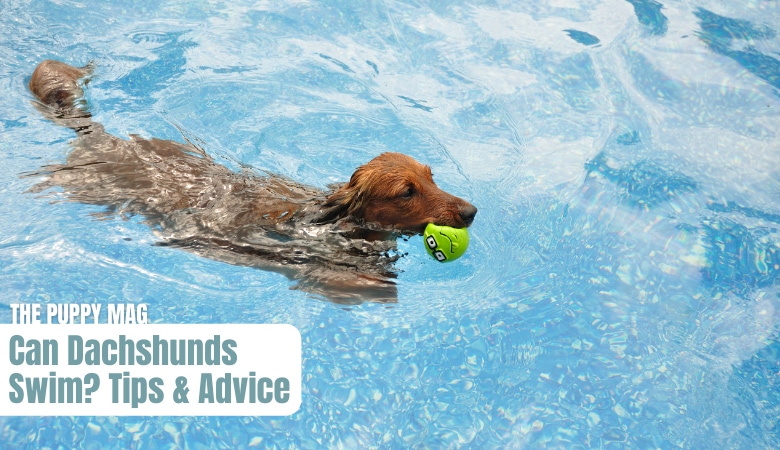